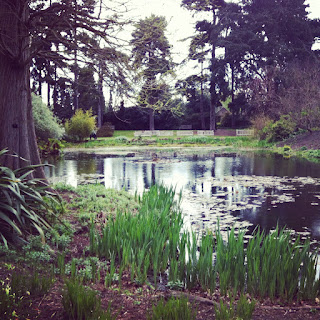 Despite the April showers at the moment, we took a trip to Kew Gardens, London, last weekend. We had a lovely day out and on seeing 'Afternoon Tea at the Orangery' quoted in the guide leaflet, we finished up there.
It is a lovely building and all the food looks of good quality but it wasn't quite the afternoon tea i was expecting.  I'm not sure if it was because we went later on in the day as opposed to lunch time or whether i've just been spoiled in the tea department!  ...You can only imagine the decadent images of sandwiches and scones that pop up in my head!

Anyway, i saw on the menu was 'Kew's special blend tea' and that there were glass jars of loose tea on the counter, which looked very nice, so i asked which loose tea they had.  The lady serving just sort of barked that they were just for show and listed the teas they had so i quickly chose Jasmine and grabbed some chocolate cake! It was a very nice cake but at £3.50 per slice we decided to share a piece along with our drinks which was fine.

The tea was nice enough but wasn't quite the silk teabags and quality teas that I've had from places such as Teapigs and Jing before. Also, the teapot wasn't that polished up and there was some limescale in the bottom, ewwww haha! So i think this is probably what you expect from places offering tea because it doesn't always get quite the same amount of care as with coffee e.g. Costa "would you like chocolate sprinkles with that?"!  Since i aim high though, i do crave good service and think a bit more effort could be put in to serving tea. 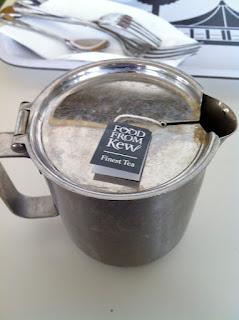 Maybe it's just too busy in London for quality tea service but i had higher expectations at Kew compared to the standard tea shop, as it's such a famous garden and they know a thing or two about plants.  Perhaps the tea experience could have been as rich as the prices?

Let me know what you think and have a great weekend!
Labels: Places